You don’t have to be a Yankees fan or even like baseball to know who Yogi Berra was and why people loved him. Yogi was famous for his hilarious quips like “It gets late early” or “You can observe a lot just by watching.”

Recent events have me wondering, does Yogi’s saying, “It’s déjà vu all over again” apply when it comes to inflation?

You have to be in your sixties or seventies now to personally remember a time when America lived through a period of rapidly rising prices. From 1973 through 1982, consumer prices rose on average 9% per year. Some years, like 1979-1981, prices rose 10% or more.

Here’s a chart that shows what that era looked like – 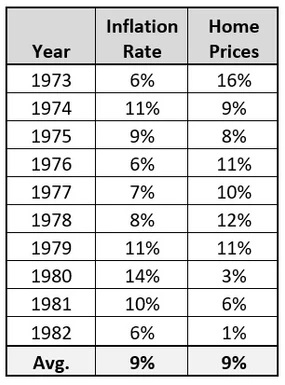 What’s causing these price rises? Supply disruptions left over from the COVID pandemic, the Fed spending trillions of dollars it does not have, and other factors.

But rather than debate the cause of inflation, let’s assume that we are entering an era where prices will rise like they did in the 1970s. I’m not saying I think that’s going to happen, but it is a possibility. The consensus among economists is that inflation will be more significant in the years to come –  by how much is the question.

Housing prices rise during inflationary periods. We’ve already seen a sharp rise in housing prices over the past 18 months due to demographic shifts, an eviction moratorium, and a supply crunch. But what would happen if we saw a repeat of the 1970s in the 2020s? Not only would we all be wearing polyester suits, bell-bottom jeans, and platform shoes (LOL), housing prices might look like this by 2026 – 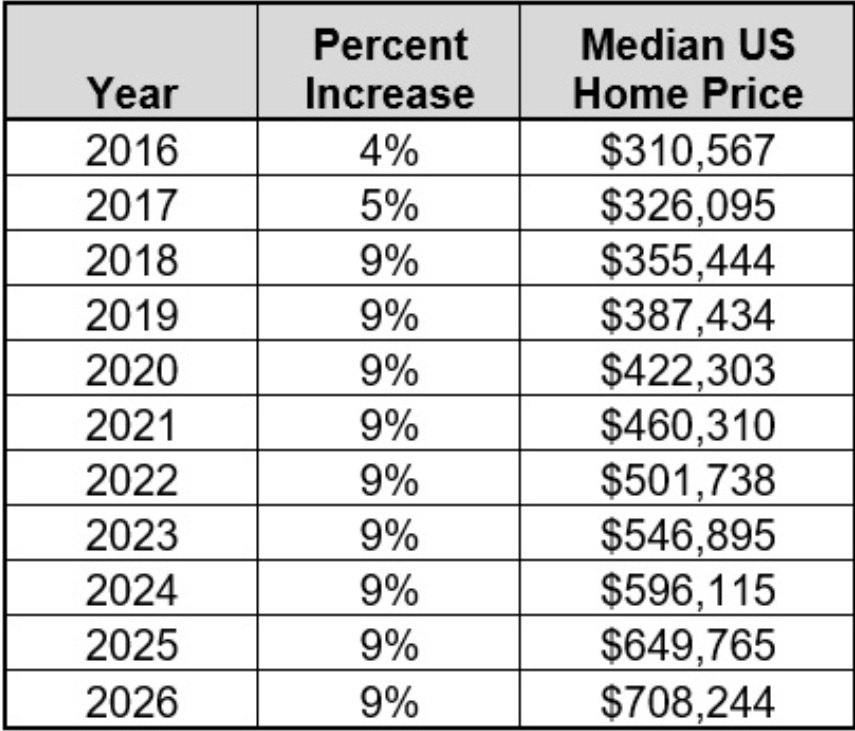 Yes, you’re reading that chart correctly. Housing prices would more than double between 2016 and 2026. And that’s just an average estimate. In Westchester County, prices might rise higher than the national average.

Inflation can be thought of as both a mindset and a virus. In the 1970s, people began to expect inflation to happen, so much so that it became a “given.” Wages, prices, asset values, and interest rates were all increasing; that’s just the way it was, the norm. It took a decade or so, from 1982 through the end of Reagan’s Presidency, to remove this inflation expectation from the public consciousness.

Inflation as a virus occurs when it becomes “infectious.” Gas and food prices rise, so wages need to go up to maintain living standards. Lumber prices soar, so steel producers up their prices too, just because they can. Once vital sectors of the economy see rapid, sustained price rises, everyone else catches the disease, and prices soar.

Now let’s consider the counter-argument to rising inflation. Interest rates remain near historic lows. In the 1970s and early 80s, interest rates rose along with prices. We do not have an energy or commodity crunch, at least not yet. While the Biden Administration has taken steps to reduce America’s ability to be energy independent, we are not nearly as dependent on foreign oil as we were when Jimmy Carter was President. The “low to modest inflation” pundits argue that the price spikes we’ve seen are temporary and will fade over the coming months.

Who is right? Time will tell. But as real estate investors, we need to at least consider the possibility of greater inflation in the years immediately ahead. What would that mean for us?

Higher prices for real estate of all types – single-family, multi-family, and commercial. If you’re fully invested in real estate now, that’s a very rosy scenario. If you’re looking to acquire rental or other property, buying sooner rather than later would be wise.

Inevitably, rents will also climb. There’s no way around that happening if rental property value is rising at 5% to 10% every year. We are experiencing this rising rent trend right now.

Here’s another aspect of inflation to consider. When inflation slowed in 1983, 84, and 85, did housing prices fall to pre-inflationary levels? In most markets, no. We entered a period of relative price stability, and then housing prices rose, albeit at a slower pace.

The 2008 crisis was something altogether different than inflation. That debacle was caused by predatory private mortgage lending and unregulated credit markets. In 2021, mortgage companies are not lending to people who cannot afford to buy the property, and Wall Street is not passing toilet paper (packages of unsound mortgages in or near default) back and forth to bilk mega millions out of an unsuspecting public.

I’m a firm believer in real estate as a sound long-term investment. My faith is based on the fundamentals and years of experience. That said, if we are indeed entering an era of higher inflation, and that does seem more likely than not, then hard assets of all types will become even more valuable.

At Sterling Property Solutions, our team can answer all of your property management questions and address any challenges. Together, let’s form a plan for you to take full advantage of the current conditions and put in place a robust, long-term program for your success. Please give us a ring at 914-355-3277 or send us an email at info@sterlingpsi.com.

Get a Free Rent Analysis Now

Breaking a lease in New York